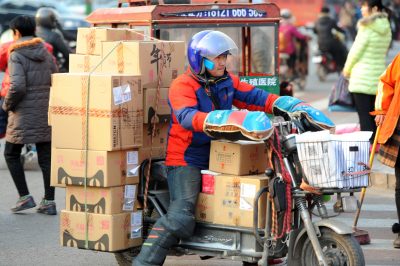 China’s retail e-commerce market has been the largest in the world since 2013. Its sales grew 34-fold in the decade to 2020 compared to the world’s ninefold growth. In 2020, its sales stood at US$2.3 trillion, representing just over half of the world’s e-commerce market total of US$4.3 trillion. What has contributed to this remarkable growth?

China has the most online buyers and sellers aided by being the world’s most populous nation. At the end of 2020, it had 782 million online consumers, more than twice the US population, the next largest market. Its largest e-commerce platform, Alibaba’s Taobao, has 4.5 million active sellers in the country. In contrast, US e-commerce giant Amazon has 1.5 million active sellers worldwide.

China’s e-commerce market is not only large but diverse — providing rich pickings from a variety of brands. Although richer cities like Beijing, Shanghai, Guangzhou and Shenzhen remain important, the main drivers of growth are smaller and less wealthy cities. These cities represent emerging middle-income buyers who have turned to online stores in droves due to limited access to physical retail stores in their cities. They mainly purchase value-for-money consumer and household necessities rather than high-end goods.

In China, over 90 per cent of e-commerce sales are done through mobile devices versus 43 per cent in the US. More broadly, China has 932 million mobile internet users representing 99.2 per cent mobile internet penetration.

But the early days of online shopping were marred by a lack of transactional trust. Alipay, the pioneer, addressed this through an online escrow system. Alipay keeps the payment, for about 10 days after the receipt of goods by a buyer. This gives the seller the confidence they will receive the payment, and the buyer the confidence their payment will be refunded if needed.

Other innovations in digital payment include Alipay introducing its own virtual version of a credit card in 2015. With Huabei, consumers can defer their purchase payment for a month or make payments in instalments, making it more attractive to shop online. Also, through Zhima Credit, a personal credit score system, consumers can rent items, book hotels or try products before deciding to buy — all without making a deposit. Zhima Credit determines consumers’ credit score based on information it collects such as online credit history, online shopping, bill payment, money transfer behaviour, and professional and education background.

Continued innovations have boosted the payment apps’ uptake, and in turn e-commerce growth. Alipay and WeChat, together with other popular apps, such as Meituan (for online food delivery) and Didi (for ride-hailing) are now known as ‘super-apps’. The main app contains sub-apps or mini programs developed either by the app or a third-party. For example, Alipay users can top up their mobile phone credit, pay bills, book a car, make investments, buy insurance, check their COVID-19 health code or make donations.

Live streaming, together with short videos and social networking, is transforming online shopping into a fun, interactive, and entertaining experience — social commerce. In the three years to 2020, livestream sales had jumped by over 28-fold to 1.05 trillion RMB (US$157 billion). On the first pre-sale day of ‘Double-11’ in 2020, China’s biggest shopping day, Weiya, one of the most popular influencers sold over 5.3 billion RMB worth of goods for Taobao.

Consumers want goods delivered quickly, safely, conveniently and cheaply. To address last-mile delivery challenges, companies have poured huge investments into warehouse automation and smart logistics technology. For example, Cainiao, the country’s largest online delivery company, takes an average of 48 hours to deliver a package nationwide. JD now offers same or next-day delivery in over 200 cities. A decade ago, it was only available in six cities.

The government considers e-commerce to be a key driver of economic growth. Many of the above e-commerce drivers have been nurtured and supported by the government at different stages of development.

High mobile internet penetration has been supported by investment in infrastructure, particularly the accessibility and speed of the internet. Logistical warehousing is made easier by land earmarked for e-commerce logistics in town planning. The government helped pilot agricultural e-commerce value chain demonstration projects. Tolerant financial regulation, at least until more recently, has allowed financial technology to innovate and thrive.

Perhaps the most overlooked factor is the open-mindedness of Chinese consumers toward new technology. China has changed so much and so fast over the last 40 years. As such, its consumers and citizens are well adapted ‘to innovations … unmatched anywhere else’.

Jeep Gladiator Bed Cover: The Ultimate Protection for Your Truck

Jeep Gladiator Bed Cover: The Ultimate Protection for Your Truck

There are several advantages of Online shopping

© 2021. All rights reserved by aeoshopping.com